The new Sky MaxiDrill 10 Series will be launched in the UK on the OPICO stand [no. 840] at the Cereals event. 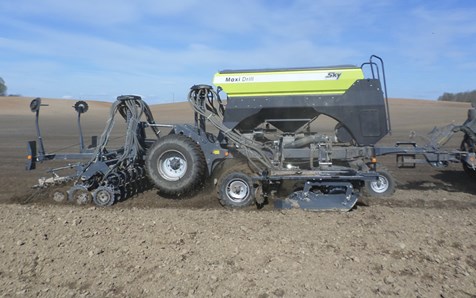 First seen at Agritechnica in 2017, the overhauled drill has new and improved features including the ability to seed three different products from separate hoppers (eg seed, fertilizer and slug pellets), with individual metering systems, feeding into two distribution circuits,  which can place product at two different depths. This means fertilizer application can be targeted, reducing the total amount applied and minimising waste. This is particularly useful in cooler, northern areas or where crops have a shorter growing window and need to get off to the best possible start.

Commenting James Woolway, OPICO Managing Director said, ‘Originally launched in 2002 and with over 1,500 trailed drills at work across Europe, Sky’s MaxiDrill already has a proven track record. It is a high speed, versatile, machine with a large hopper capacity and can be used as a min-till drill into crop residues, as well as into ploughed and prepared seedbeds.  It can also be used as a direct drill under certain conditions. The new features will improve its versatility across the UK market, offering precision seeding and application of fertiliser.’

The new Series 10 MaxiDrill updates include:

The new Series 10 MaxiDrill is available in 3m, 4m or 6m models with or without fertilizer, and with or without the third micro-hopper.  The 4m and 6m models can be folded in two parts, allowing easy access to the discs and making emptying the hopper straight-forward.

The separate transport axle allows for comfortable and safe road transport, but can also be used effectively in wet ground, when the transport wheels can lift the pressure off the cultivation and seeding elements, preventing blockages and ensuring the drill keeps working.  When the weather catches the operator out, in extreme conditions, they can also be used to lift the drill out of work.

Since the press wheels are not used for transport, and are dedicated to consolidating the seedbed, they run with low tyre pressure ensuring flex and an ability to shed excess soil and residue.