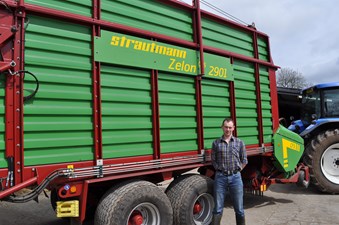 The purchase of a forage wagon has enabled Derbyshire farmer Glenn Mosley to take full control of the farm’s silage-making operation. With an entry level machine – a Strautmann Zelon – there’s now less stress, better quality silage, and the benefits of convenience, cost-savings, and better cashflow.

At Knotlow Farm near Buxton, Glenn farms with his family – his grandparents, parents and sister. The 400 acres of farmland supports a flock of 800 Camtex and Texel-cross ewes, and 35 suckler cows. Silage, haylage and hay are taken off 140 acres, and 60 acres of winter barley are grown to supplement the diets of 400 beef cross dairy calves which are bought in and finished each year. Glenn also grows 10 acres of potatoes and supplies local pubs and shops.

The 330 acres of grassland on the farm is a mixture of permanent pasture, less favourable land which is reseeded every 10-12 years, and 120 acres of better quality land which is sown with medium term multi-purpose grass mixtures and rotated with the arable crops.

Glenn explains: “We try to have clover in the leys, but we also need to control the thistles and nettles. There’s no time in the spring for reseeding. So fields are reseeded in late summer/early autumn after the barley harvest. We let the grass come, and then spray off the weeds. Then in the second year of the ley, straight after cutting, we stitch clover in with a tine harrow and seeder. The soil is warm then, the grass short, and the sward more open, so this works well.

“The fields are shut up in the first week of May, after taking the sheep out. We used to come and take our first – and only - cut in the second half of June or even early July. But last year we moved to cutting in mid-June to get younger grass of better quality. The aftermath is then used to finish lambs.”

Around 90 acres is cut for pit silage, and a further 30 acres is made into round bale haylage for the youngstock.

“Our silaging contractor used to come with a tractor and trailed forage harvester, and we’d also hire a trailer off him. I’d do the mowing and then the carting, and Dad would be on the clamp with the buckrake. 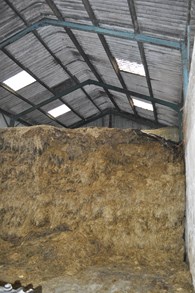 “Good silage quality depends on the cutting date and most importantly, good consolidation. You don’t want air in the clamp, so actually the best man needs to be on the buckrake, not on a machine in the field!

“We have just the one silage pit, and it’s inside an old haybarn which has been extended over the years. The clamp is long and narrow – 165ft long and 30ft wide. And to get to it, there a right angle turn on entry into the building. There’s not a lot of room on the top of the clamp, and as it fills up, there’s not a lot of headspace either.

“But then three years ago, the trailed harvester was swapped in for a large forage wagon. But it brought the grass in too fast for us. The contractor had to sit and wait for grass from the last load to be moved. We really needed two buckrakes, or at least a bigger machine to keep up with consolidating between the loads – but there wasn’t the room for that.

“With the tractor and forage harvester combination, we were charged an acre rate and knew we couldn’t buy the tackle and do it for any less money. However, the forage wagon was charged on an hourly rate, and it almost doubled the cost of the silaging operation for us.

“We considered whether to build an open clamp, but that wasn’t going to be straightforward, and there was no obvious site except where the current clamp was.

“So we toyed with the idea of buying an old forage harvester, but then we would need more staff, and would it be reliable?”

So Glenn decided to take control of the situation, and buy a smaller forage wagon for the farm. “We wanted an entry level machine that was simple to use, and of course, well-made and reliable.”

Glenn looked at a couple of forage wagons and chose the Zelon 2901, from his local Strautmann dealer. This is the smallest machine in the range with a loading capacity of 27m3 (according to DIN 11741) and its 105hp requirement made it suitable for his New Holland TM120. 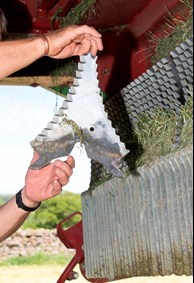 Glenn especially liked the set-up and design of the double-sided cutting knives. “I wanted a shorter chop length, and with 32 blades, the Zelon gives a 44mm chop.

“I like the fact that the knives are reversible. The manual recommends sharpening them after 12 hours of use, so I can do a day’s work on one side before needing to turn them over. This is easy to do thanks to their quick release system.

“There’s a break back system which means the blades will spring back if they hit an object and I can reset them from a button in the cab. We’ve had the Zelon for two seasons now, and not had to replace any blades yet. Out of season, I remove them from the machine and store them in a bucket of oil.” {Hence why the photo of the forage wagon has no knives in it!}

With only around 100 acres to be cut each year, Glenn reckons the Zelon’s work can be done in five days in total. “It will have paid for itself in 8 years, and I plan to keep it for many more years, so there’s a big saving in the long run,” explains Glenn.

“But in practice, we are seeing other benefits already.

“Cashflow, for instance: with our beef and sheep enterprises, we’ve less income in the summer months, but lots of bills to pay out on. Now we’ve our own forage wagon, and can do it all ourselves, we’ve no silage contractor’s bill!

“Our contractor had always been very good at coming out when we called. But the weather can turn quickly and it’s good to have our own kit so we can just go off and do a bit at a time.

“We’ve increased the acreage cut by 10 acres, but reduced the tonnage per acre because of taking an earlier cut which will be better quality. When we were paying the contractor on an acre rate, we wanted as much grass as we could – but actually there was no benefit in this approach. Last year’s silage was higher in dry matter, looked and smelled good, and the stock have done well on it.

“Ideally, I’ll mow late morning, ted in the afternoon, row up the next morning, and then go in with the Zelon later that day.

“Having our own forage wagon has certainly created a stress-free way to make silage,” adds Glenn.

- Convenience of cutting small acreages at a time

- Easier to manoeuvre into shed than a large wagon or trailer