Solar-powered Seed-n-Weed robot with simplicity on its side

A fully autonomous, solar-powered robot capable of precision drilling and weeding is set to join the OPICO line up.

Offering pesticide-free weed control with zero fuel bills, the FarmDroid is the brainchild of two Danish farmers and takes a really simple approach to how it works.

The FarmDroid uses ultra-accurate GPS to record exactly where it places each seed. Then on each subsequent weeding pass it has no need to identify what’s a weed and what’s not – it simply knows where the crop plants should be and works around them, hoes shares running between each row and blades slicing off anything between each crop plant, in the row.

This approach means that unlike other similar machines, it doesn’t need to employ banks of high-definition cameras and complex computers to identify and target weeds. It also means the machine can start the weeding process before the crop has emerged because camera recognition is not required.

Its simplicity is just one of a number of features that set the machine apart from anything else on the market. 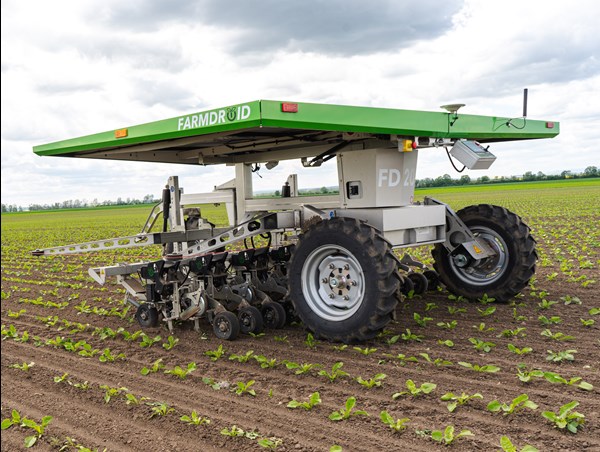 Being solar-powered, FarmDroid owners don’t have any fuel bills for the machine. Not only does this have a clear impact on the bottom line with today’s increasingly volatile energy markets, it’s also environmentally friendly. In a future where food retailers are progressively looking to be perceived as ‘green’ with carbon audits becoming more and more common, the FarmDroid can help provide one step towards energy self-sufficiency (and herbicide-free crop production).

With in-row and inter-row action it eliminates weeds both between the rows and between the crop plants. Capable of working right to up within 5mm of each seedling between the rows and 20mm in the row, the FarmDroid’s shares mean it does the complete job so there is no need for hand-rogueing problem weeds like fat-hen (saving c.£250/ha).

Weighing just 800kg, FarmDroid has the lightest footprint possible - good for soil health and the bottom line - headlands aren’t run down with the result that yields are maintained across the entire cropped area.

In fact, organic growers across northern Europe – and in the UK – have seen some fairly dramatic results where they’re using the FarmDroid. They’re reporting increases in beet yields of 40-60% over tractor-hoed crops and are putting this down to the combination of precise seed placement and intra-row weed control making for uniform crop development.

Combined with the savings in herbicides, fuel, labour and machinery costs (depreciation, maintenance, tyres, capital tie-up, etc…) – the financial argument for FarmDroid is a strong one, especially as the purchase price and ongoing running costs are a fraction of those associated with the traditional machinery used to do the job. The current six-row FarmDroid FD20 retails at £59,500 with an additional £4,243 required for an RTK base station. Grant funding is likely to be available to assist with the purchase of this innovative seeding and weeding machine.

“We believe robotics will form the backbone of the next major step in technological development for agriculture,” explains OPICO managing director James Woolway.

“FarmDroid has come up with a unique solution that is suited to large and small-scale farming systems. OPICO’s distribution network, parts and technical teams are more than capable of backing the product up so it’s a great fit.

“While it’s early days, we’re coming to the UK market with a product that is tried and tested. The timing couldn’t be better with rising energy costs, labour issues and environmental factors at the forefront of UK farmers’ minds. FarmDroid ticks so many boxes in all these respects.”

A bit of background…

The FarmDroid concept was the brainchild of Jens and Kristian Warming – two farming brothers from central Denmark. They built the first prototypes with the help of some robotics specialists in their farm workshop and launched the machine to the world at Agritechnica 2019. Now located in a state-of-the-art manufacturing complex, the business has over 250 machines out working across northern Europe.