Independent consultant Barrie Audis explains why high levels of iron, molybdenum and sulphur in grass and grass silage may have negative effects on reproduction in the cow and how subsoiling compacted ground can restore herd fertility.

In compacted soils, there is no air movement. The lack of oxygen in the soil prevents iron from oxidizing and iron ochre – visible as thin-rust-coloured threads - forms around the root hairs of plants. This iron then translocates into the leaves of the plant. This leads to increased levels of iron in forage mineral analyses.

“Problems can also occur when molybdenum is also present in the soil at a high level,” explains Barrie. “Typically, this occurs in soils with a high clay content and soils which have a higher pH. Molybdenum is also taken up by the plant, and so will also be seen at increased levels in forage mineral analyses.

“Reactions start in the rumen when molybdenum and sulphur are being supplied within the total diet. Molybdenum and sulphur combine to form a compound called thiomolybdate. This in turn seeks out and binds with copper. In this neutralised form, it is not damaging and is eventually excreted.

“However, if there is not enough available copper in the rumen, the thiomolybdate moves into the animal’s blood and tissue. There it interferes with the function of certain enzymes, which has been detrimental effects on cow fertility. 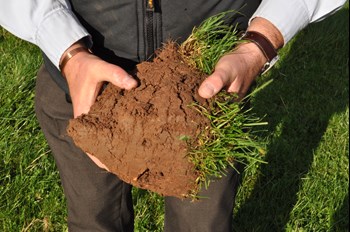 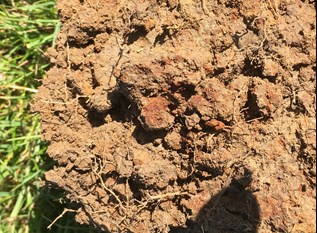 Soil showing signs of compaction (left) and one wit iron ochre present (right). Compacted soils such as these will result in grass and forages high in iron.

“The actual role of iron and its effects in the rumen on copper is a little uncertain, it is thought that the iron combines with sulphur and may attract copper, forming a harmless compound of iron, sulphur and copper. This reaction may allow the thiomolybdate to form more quickly as there is less rumen available copper to combine with thiomolybate to render it harmless.

“So high levels of iron, sulphur and molybdenum can be detrimental to herd fertility.

“It is vital at this stage to understand that thiomolybdate is a problem in its own right and is not a secondary copper deficiency or copper lock,” says Mr Audis.

“There are one or two approaches to tackling thiomolybdate toxicity,” explains Audis.

“The first is to ensure there is enough available ‘sacrificial’ copper of the correct type to satisfy the iron and thiomolybdate in the rumen. This copper can be supplied in mineral premixes and/or mineral boluses. But ensure overall levels do not create a copper toxicity by keeping within the legal requirements for copper supplementation.

“The second approach is applicable to farms where soil is compacted. Oxidisation of the iron ochre is prevented in these soils, and hence the iron content in grazed grass and forages is elevated.

The approach being taken by Mr Audis looks at all aspects of grassland and soil management, with input from all interested parties.

“On these farms, the compaction needs to be broken up by subsoiling or sward-lifting to restore good soil structure. This will then enable oxygen down to the plant roots and the iron ochre can dissipate.

“A healthy soil will have at least 25% air in the topsoil, enabling air exchange and enabling surface water to drain. The top 15-20cm of soil should be really friable with plenty of earthworms,” notes Mr Audis

“Removing compaction from grassland is beneficial on all farms, regardless of soil type. Sward-lifting is widely acknowledged to boost grass growth and allow earthworm populations to increase. It also benefits herd management as the improved drainage will enable an earlier turnout and an extended autumn grazing.”

Poor herd fertility had been an issue for many years at Lower Bentley Farm near Bromsgrove for dairy farming couple Graham and Di Gibbs. Their 190-cow herd is run on an organic system, with all cows and heifers served by bulls, and none put to AI.

The grassland is mainly permanent pasture and most fields have never been ploughed up or reseeded. The farm is in an NVZ, and composted manure and dirty water are spread little and often, so as not to kill the earthworms.

Most of the land has heavy clay soils which have very high levels of molybdenum and iron.

Ten years ago, when Mr Audis first started working with the Gibbs’s, he recognised one of the signs of molybdenum toxicity - cows’ coats were turning a reddish brown colour. He explains: “We were battling with a thiomolybdate excess. I adjusted the mineral formulation in the diet, but this was not enough. So Graham obtained the necessary derogation to use mineral boluses specifically designed to supply sacrificial copper and thus supplemented the herd’s copper intakes.”

Recognising that soil compaction was adding to excess thiomolybdate in the cows, plus it would also be depressing grassland productivity, Mr Audis set about persuading the Gibbs’ to invest in a grassland subsoiler.

Mr Gibbs was already aerating the ground: but the spikes on the sward-slitter were only working the top 10cm of soil.

“Barrie and I went into one of the fields that had been ploughed in the past and dug a hole with a spade. You could see where the roots of the grass hit the compaction. We dug down below the compaction and found straw that was eight years old and still yellow. It hadn’t started rotting down yet.” Mr Gibbs explains.

Mr Audis explains: “Most of the fields have never been ploughed up and so over time they had become increasingly compacted by heavy machinery and livestock. We could see the rusty brown threads of the iron ochre which was causing the elevated levels of iron in the forage samples.” 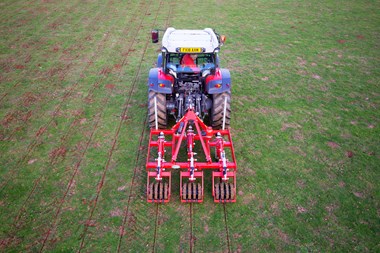 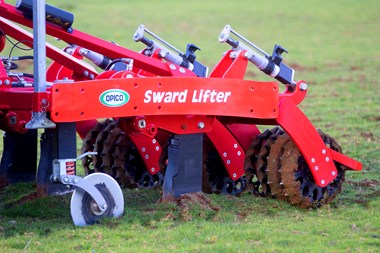 Sward-lifting to remove compaction has reduced iron levels in forages and improved grass and clover growth at Lower Bentley Farm.

Convinced by the evidence, Graham bought an OPICO sward-lifter. This machine would remove the pan, improve drainage and enable air exchange. This would allow oxygenation of the roots and encourage plant growth and, importantly, prevent iron ochre from forming.

In the first year, half the farm was sward-lifted. Mr Gibbs was delighted with the results. “The soil was really tight, and it was a very slow process. But after the first year of sward-lifting, the wet fields were not as wet, and there was more grass. I couldn’t believe the difference. It gave more life to my leys, and I’ve actually put overseeding on hold for now.

“I’ve one field in particular where the grass never seemed to do well. I’d overseeded it three times and it never took. Then I sward-lifted it. The result is amazing – there is now loads of grass and especially good levels of clover, and it’s become one of my best fields. It’s just a shame it’s my smallest field!”

Mr Audis adds: “You could see the extra grass growth in the subsoiled fields, especially either side of the slit made by the sward-lifter. Looking at the silage cuts in the clamp, I’d estimate there was around 20-25% more grass in them over that first year.”

“When we analyse the forages, they always show a high presence of molybdenum – ranging from around 2 to 5 mg/kg DM. We can’t ever change that.

“However, the iron level was something that could be reduced by getting oxygen down into the soil. Before Mr Gibbs started sward-lifting, iron levels in forages were around 200 mg/kg DM. But since compaction has been removed, levels have dropped off dramatically. The latest DM analysis, from July this year, was very low at only 77 mg/kg.”

Half the farm was sward-lifted in 2015 and the rest in 2016. From then, Mr Gibbs has been sward-lifting fields on a 3-year rotation. This is done in the autumn months when the ground is dry enough to crack but not too wet to smear. 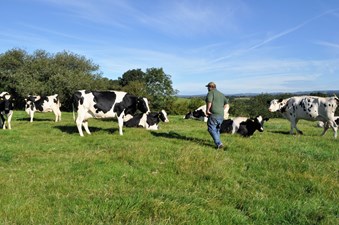 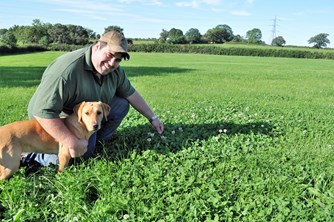 Mr Audis has also adjusted the herd’s rations to take into account the mineral levels in the forages, and the mineral bolus.

“Diets are carefully formulated to make sure that levels of copper supplied do not cause copper toxicity,” he remarks. “Regular monitoring of blood status and copper liver content is carried out.

In Graham’s rations, iron levels are running between 400 and 500 mg/kg DM, and molybdenum 1.5 to 2.5 mg/kg DM. Clover is an important constituent of Graham’s leys, but it is naturally high in molybdenum, and this exacerbates the situation.

“The farm’s NMR figures show fertility has been steadily improving over the past four years since sward-lifting was introduced. Fertility is multi-factorial, however, and there have been a number of changes made on the farm during this time, including a recent investment in activity monitors to aid heat detection.”

Graham’s vet Anne Gibbs of Macarthur, Barstow and Gibbs makes weekly fertility visits to the farm. She comments: “The general and reproductive health and resilience of the cows has improved. They are ‘transitioning’ well through the calving period and cleaning up promptly. Cases of metritis have fallen and the requirement for intra-uterine treatments have been reduced.”

Mr Audis warns: “Farmers may be familiar with the visible signs of copper deficiency in cattle - reddish brown coats, grey ‘spectacles’ around the eyes, and rear bald ears. However, these are also the signs of a thiomolybdate excess.

“So before reaching for a mineral bolus, farmers should also check grassland for compaction. The root cause could be high levels of iron in the forage. In which case, sward-lifting will be a key part of the solution.”