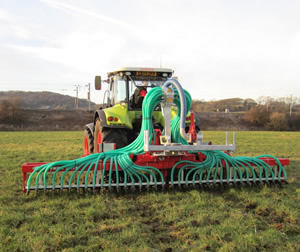 Carmarthenshire farmer John Fowler and his son Edward have always followed the principle of working as efficiently as possible. With 485 hectares (1200ac) of grassland and 620 dairy cows, time is of the essence. When OPICO launched a combination pasture aerator and slurry injector earlier this year John immediately saw the potential benefits to both his grassland programme, and also his time management.

At Waunrhyddod near Whitland, the Fowlers have been using a pasture aerator (slitter)for a number of years to encourage spring growth and to aid sward recovery after heavy grazing and silaging. John explains: “Using an aerator regularly hashelped remove compaction, allowed the soil to ‘breathe’ and improved drainage.

“The land is mainly slopingand wewere spreadingslurry with a splash-plate applicatorvia an umbilical system. I knew this way was losing nitrogen to the atmosphere and wanted a more efficient way of spreadingit – slurry’s free so we might as well get the best from it.

“With a big herd there’s always plenty of parlour washings and slurry to get rid of. It’s a thin slurry and I wanted to ensure that it went directly down to the roots of the grass, partly to prevent run-off – particularly when it rains – and partlyto reduce nitrogen wastage.”

Two-in-one
Earlier this year John saw an advert in the farming press for OPICO’s new Sward Slitter and Slit Injector combination.This aerates the soil whilstsimultaneously targets slurry directly at the roots. He explains:“I hadn’t seen the combination of a pasture aerator and slurry injector anywhere else before. I’d seen a dribble bar mounted on an aerator and thought that combination was a good idea, but a mounted slurry injector is better still. So we traded the splashplate in and bought one.

“We first used it in April this year and saw an immediate increase in grass growth, more so than when I used the pasture aerator and splash-plate separately.”

The Fowlers take four cuts of silage per year and spreads 3,800gallons/acre after each cut. The grazing land receives 2000gallons/acre three times per year.

The rotating blades of the Sward Slitter cut slots into the sward, allowing oxygen interchange through the soil surface and encouraging moisture in the top layer of soil to evaporate faster. The Slit Injector is mounted on top and dribbles the slurry directly into the slots, targeting the roots and reducing nitrogen loss via evaporation. This also leaves a cleaner sward afterwards.

Splash-plate application of slurry has only 20% nutrient efficiency,whereas slit injection gives an estimated 85% efficiency. The volume of nitrogen that escapes into the air is reduced, therefore retaining the value in the slurry.

Edward says: “We’ve adjusted the fertiliser plan because injecting slurry ensures the nutritional value is maximised so we needless artificial fertiliser which saves money. Plus,spreading whilst aerating cuts down on a pass, saving time and fuel too.”

He adds:“I have a contracting business too but the priority to date has been our own grassland. However judging from the interest we had when demonstrating it at our local agricultural show and fromour neighbours, I’ll definitely be adding it as a contracting service.”

Removing compaction
OPICO’s Nick Rider explains: “When it comes to removing soil compaction, the first thing farmers should do is take a spade and dig a hole to see how deep the problem is.

“For compaction that’s less than 12cm in depth, then slitting or aerating is needed. This can be done any time of the year as long as it’s dry enough to get on the land.

“For compaction deeper than 12cm, as caused by livestock and heavy machinery, then farmers should use a grassland subsoiler such as the Sward Lifter to break up the mineral pan and aid drainage.  This is best done in late spring, after first cut silage, or early autumn before the ground gets too wet. So this September period is an ideal time for subsoiling grassland to prevent problems with waterlogging over the winter.”