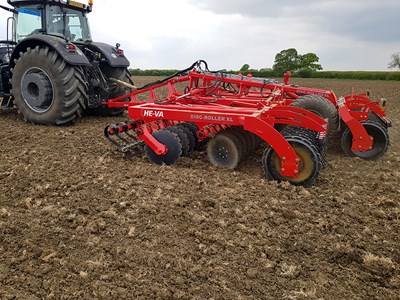 In response to demand for a heavier disc type machine HE-VA has developed the Disc Roller XL Contour designed for more aggressive cultivation than its smaller sibling, the Disc Roller Contour, affords. Suitable for both primary and secondary cultivations at high speeds - from stale seedbed preparation to the destruction of standing cover crops. The versatility the Disc Roller XL Contour brings to the farm saves passes, decreases machine cost per hectare and provides the best start possible for the coming crop.

HE-VA Product Manager Glenn Bootman commented, ‘The Disc Roller XL Contour can be used for both shallow and deep cultivation and incorporation of crop or cover crop residues. This one pass, high speed, versatile cultivator ticks the box for reducing cost per hectare – essential in today’s modern farming systems’

HE-VA’s unique contour following system comes into its own when working at shallow depths to ensure all undulations of the field are evenly cultivated to the same depth across the full working width. Depth control is simple to use with the disc depth hydraulically operated from within the tractor cab.

Unlike traditional concave discs or aggressively angled discs that lift soil and cut out “grooves” forming a corrugation effect under the surface, HE-VA’s DSD, depth synchronised disc, system works to move the whole soil surface and is effective in both shallow soils and at depth. The 610mm Sabre discs pull themselves into the ground which assists penetration in hard conditions enabling more soil to be moved and trash to incorporated across the full working width.

HE-VA’s Disc Roller XL Contour will be on display for the first time at Cereals Event 30th June and 1st July 2021.