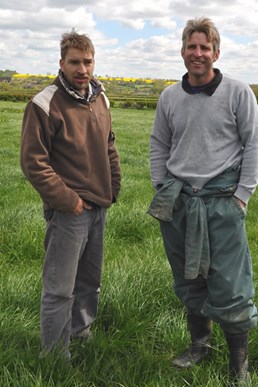 Efficiency and economics are front of mind for dairy farmer Rob Harrison, who runs a 240-cow herd at Greystone Farm, near Moreton-in-Marsh in Gloucestershire.With an Arla contract, Rob is focused on maximising milk solids,but doing so efficiently,by making the most of his grass.

This year, milk yield from his Holstein-Friesian and cross-bred herd has been allowed to drop to a rolling average of 5,500 litres/cow, from last year’s 6,000 litres/cow mark: a deliberate cutting back on feed due to economics. Milk quality is: 4.39% butterfat and 3.45% protein. Milk from forage is 3,500 litres/cow.

Rob’s feeding philosophy is to balance grass intakes using straights, rather than compound cake, as they are cheaper. He also buys straights forward, so there is insulation from the volatility of the marketplace.

The winter TMR is based on grass and maize silages, and straights – typically biscuit meal and home-grown wheat for energy, and soybean meal to supply protein.

Rob explains:“It’s twofold: we get rewarded for higher fats and protein, and there’s economic reward in making more milk from forage and straights.

To this end Rob has adopted a range of strategies to maximise grassland productivity and milk from forage.

The milking cows are turned out at the end of February. The farm is just outside an area of Cotswold brash, and instead the soils are loam over clay.

The dry cows are not turned out until the end of April. Rob explains: “We keep them indoors for longer so we have better control of their diets at a time when the weather is very changeable.

“All cows are grazed to the end of November, longer if possible.”

To get cows out to the fields cleanly and limit poaching in the wetter months, Rob has invested in cow tracks. But he admits that the grazing fields do become poached and compacted.

To remedy this and enable the ground to dry out sooner, the fields are subsoiled every autumn by local contractor James Arkell with his OPICO sward-lifter. He will test fields for compaction using a penetrometer, and before sward-lifting will dig holes to see how deep the compaction is, before setting the depth of the subsoiler legs.

Rob explains: “Sward-lifting is a mechanical means to re-instate good soil structure. This then prevents soils becoming water logged, and nutrients can be better mobilised.

“But it’s not a fast job! For me, that’s the benefit of using a contractor: James can pay attention to the detail, and spend a day sward-lifting, whereas I find it difficult to dedicate big blocks of time to jobs like that.

“This spring it’s been very noticeable that more grass has grown in the fields which were sward-lifted last autumn.”

James adds: “Sward-lifting needs to be done when the ground is not too dry, nor too wet to smear.So it’s best to subsoil in late summer or autumn. This also gives the ground time to settle down over the winter.”

He warns: “The effects of removing compaction are not always instant, and it can take up to 18 months for the full benefits to come through.”

Every year, around 10% of the grassland at Greystone Farm is reseeded. Most of the leys are used for grazing, so the majority are sown with long term ley mixtures made up of perennial ryegrasses, clover and some Timothy. In recent years, Rob has used mixtures which contain chicory,which with its long tap root is beneficial for soil structure.

For the silage leys, away from the main farm, mixtures of red clover and Italian ryegrasses are sown.

Docks are the biggest broad-leaved weed problem. Rob explains: “There’s clover in most of the leys and I’m not a fan of spraying, as the ‘clover-safe’ herbicides will still knock it back. So we will only spray in the worst fields. For the rest, we try to keep docks under control by pre-mowing or topping. And then rely on the grass to outcompete the weeds. 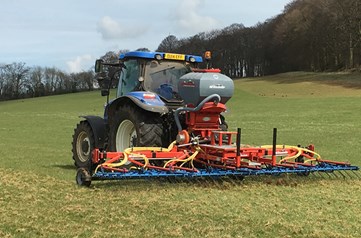 “Historically we struggled to control weeds in new leys. The way to tackle this was by crop rotation, and we would reseed in the autumn after cereals. But as cow numbers have increased, we now also grow forage crops like kale and fodder beet. So these days, we reseed in the spring, however we still get weed infestations as the new ley establishes.”

This this was one of the factors that last year tipped Rob into trying some overseeding. He explains: “Reseeding has its benefits: a big DM yield increase, and the introduction of newer, more productive, varieties. But overseeding has benefits too: the sward is being rejuvenated without all the cultivations and cost of a full reseed. Plus the soil structure is maintained, and I don’t lose any production from the field.”

Rob identified a field with a very open sward, and low productivity. This was grazed down hard by the cows and then over-sown in early September by James using an . A seed mixture designed for rejuvenating leys, containing a higher proportion of tetraploid rye grasses, was used.

James adds: “For overseeding to be successful, certain conditions are essential: the height of the existing sward needs to be as low as possible- ideally grazed down tight by sheep. Moisture is also important – and so the sowing was timed just before rain was due.”

Rob explains: “The priority is always to have good grazing for the cows. So our silage-making is managed around that. If the grass gets ahead of the cows, we would make big bale silage in order to maintain a good quality of grazing.”

But this year Rob is changing his approach: “We used to take one or two big cuts. But we are now growing more grass and are going to take some extra smaller cuts through the season. For this we will use the services of James and his newly acquired forage wagon. This should enable us to manage the grazing better and also have higher quality grass going into the clamp.

“We always need to grow enough forage for the winter. But every season is different, and we need to be flexible.” 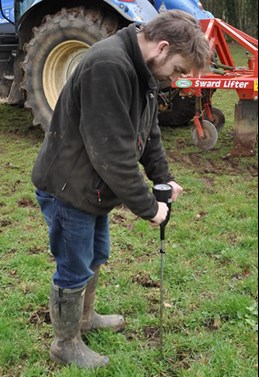 Soil testing is done each year on one third of the farm and Rob has built up a good picture of the pH, and P and K statuses of each field. This allows a more accurate and efficient targeting of slurry and fertiliser applications.

Rob is keen to utilise some of the technology used by arable farmers, to help grow more grass and improve efficiencies. Over the past year, he has been assessing whether satellite imagery of his fields could help with managing his grassland. The pictures, which are taken weekly, are measuring chlorophyll content and hence giving indications on field productivity.

Rob used to use a platemeterto monitor grass growth, but this practice had lapsed and for the past three years he has been judging the grazing wedge by eye.However this April,he took delivery of a new platemeter, and will start measuring again, appreciating that this will provide data on which decisions can be made more accurately.

Rob adds: “I can already see there is more grass present in the sward of the overseeded field. As the season progresses, I’ll be measuring its productivity with the platemeter. Then I can evaluate whether to add more overseeding into my grassland strategy.”