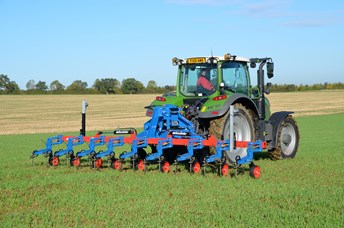 Growers looking to reduce their dependence on herbicides have a range of new tools to choose from to help combat weed issues, as OPICO launches a complete range of Hatzenbichler inter-row cultivators.

Austrian firm Hatzenbichler is well known for its comb weeders, grass harrows and seeders which have been brought into the UK by Lincs-based OPICO since the mid-1990s. And, although the manufacturer has been building inter-row cultivators for 65 years, it’s only recently that precision guidance technology has made them a realistic option for mainstream arable production.

“However over recent years, with cost pressures and herbicide resistance developing more and more conventional growers are showing an interest.

“Technology has moved on too – camera guidance on steerage hoes means it’s now possible to cover decent acreages in a working day. While this has initially seen biggest take-up with those growing row crops such as beet, vegetables and maize, we’re now getting enquiries from cereal growers looking at moving to wider row spacings specifically to provide them with the opportunity to integrate some sort of mechanical weed control in their system.”

To that end, OPICO is now introducing a complete range of inter-row cultivators to complement the Hatzenbichler harrow line-up. With working widths stretching from 3m right up to 18m, there are different variants to suit different crops and row spacings.

The principle for all versions remains the same – tines mounted on parallelograms with individual depth wheels run between the crop rows, they cultivate the soil surface slicing through weed roots leaving unwanted plants to die on the surface.

There are a choice of points and tines which need to be matched to the job in hand – A-shares mounted on S-tines for deeper work or duckfoot shares and L-blades mounted on the specially designed Hatzenbicher Vibro-tine. On top of that there is a whole raft of additional options including plastic finger wheels that flick out weeds in the crop row and crop protectors that shield delicate plants from soil throw.

Camera-controlled row guidance is provided by a special headstock which has an integrated hydraulic ram to provide up to 250mm of side-shift in either direction. Oil is sent to either left or right by the camera controller, ensuring the tines run as close to the crop rows as possible without hooking out plants.

While the heavy metal is made in Austria, the clever technology comes from a small specialist firm in Bedfordshire – Tillet and Hague. The company has been developing camera guidance systems since 1995 and supplies different systems to different manufacturers all over the world.  The big advantage to OPICO customers is that they’ll have a UK-based company providing the back-up for this critical technology.

The Tillet and Hague set-up has two distinct advantages that set it apart from other systems on the market. Firstly it’s able to take a feed from two or more cameras which means it is able to provide a higher level of accuracy, particularly at row ends and where there are drill misses or overlaps. Secondly, the software is able derive a speed measurement from the cameras (called visual odometry) so that it is not dependent on a GPS or radar feed. 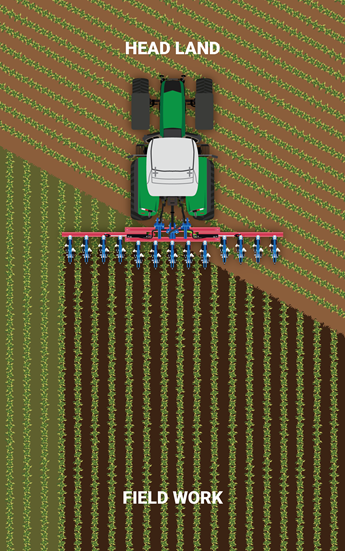 To bring an extra level of precision there’s also the option of sprayer-style GPS section control. With individual hydraulic rams on each parallelogram linkage, the Muller ISOBUS controller is able to lift individual row units as they reach previously cultivated ground. This is a particular benefit when working in fields with angled headlands – the system is able to detect when the hoe shares are reaching the end of the run and automatically lift them out of work to avoid hooking out plants on the cross-drilled headland bouts. (See graphic).

“While inter-row cultivators provide the best means of chemical-free weed control in well-established row crops, comb harrows are an essential tool in battling weeds where the crop is not as well developed and where row-spacings don’t allow,” says Mr Woolway.

“With the right drill row spacings, the combination of comb harrow and camera-guided inter-row hoes can now provide a commercially-viable means of herbicide-free weed control, giving big environmental benefits, reducing chemical costs as well as helping to overcome resistance issues and satisfying the requirements of supermarkets and government agencies to reduce pesticide usage.”

The full Hatzenbichler range of inter-row cultivators and comb harrows will be on show at LAMMA 2020, OPICO stand, Hall 6 Stand 6.230.