A lamb producer who is pioneering methods of improving the persistency and quality of grazing leys on marginal land in the Welsh uplands has won a major new grassland management award.

John Yeomans, who is involved in a three-year European Innovation Partnership (EIP) Wales project trialling ways of improving grass leys in the uplands, was named Grassland Manager of the Year at the inaugural National Arable & Grassland Awards at the London Hilton Bankside Hotel. 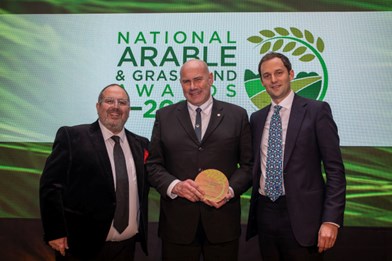 The award was an acknowledgement of Mr Yeomans’ excellent grassland management skills at Llwyn y Brain, near Newtown, where he farms sheep and cattle with his wife, Sarah.

The EIP project is putting those skills to good use by investigating whether even more can be achieved from the swards at Llwyn y Brain; it is monitoring the performance of timothy at high inclusion rates on the highest land – wet, deep peat soil which rises to an altitude of 430 metres.

That project concludes in June 2022 but the results to date have been promising, says Mr Yeomans.

“It lifted productivity massively from May to late June,” Mr Yeomans reports.

The project has demonstrated that good grassland management even in marginal areas can result in high yielding swards, producing over 12tDM/ha and supporting high stocking rates.

Independent grassland specialist Chris Duller, who has been providing technical input into the EIP project, says similar small increases in timothy were observed in some of the other original plots too, those which had experienced challenging establishment conditions due to exceptionally high levels of rainfall.

However, there was still not sufficient timothy present to have any significant impact on sward performance.

The biggest challenges of establishing the novel grazing leys at Llwyn y Brain are ground conditions and the exposure of the upland site, which limit the grazing window.

“They can often compromise ideal grazing practice so utilisation can be affected, particularly in early and late season,” says Mr Duller.

Ryegrass is still very dominant in the original plots but with an increasing incursion from meadow grass and creeping bent, especially in the wetter areas.

The mineral status of the timothy plots is very similar to the control and there is no recorded difference in trace element status.

The soil carbon assessments suggest that improvement of upland pasture with surface cultivations, on the specific soil type at Llwyn y Brain, is not hugely detrimental to soil carbon stocks.

Final sward compositions will be assessed in May/June 2022 but summing up the project to date, Mr Duller says a key finding is that timothy had in all but one of the plots grown as well as ryegrass.

Understanding the longevity of timothy compared to ryegrass – a key benefit of timothy – can however only be known further down the line, he adds.

The three-year timescale of the EIP project is one that Mr Yeomans is grateful of. “You have to trial something for at least three years to know whether or not it will work because in a shorter timeframe, results can be skewed by an exceptionally good year or exceptionally bad one.”

The award, he says, was one that reflected the input of everyone involved in the farm and indeed the EIP project.

“Lots of folk have helped and advised and given us opportunities, from the Farming Connect Management Exchange which gave me a chance to look at how farmers grow and manage timothy in Finland to the meetings and discussions I’ve had with others.

“It is important to grab opportunities to travel and meet other farmers and to learn from them. As neither Sarah or I are from farming backgrounds, we’ve had loads of help and learned from our neighbours too.

“We are also grateful to Nick Rider from OPICO who nominated us for the award. An OPICO air seeder was one of the methods of surface treatment establishment in the project.”

The Yeomans’ sons, Tom, Jack and Joe, and their partners, are involved in major decisions at Llwyn y Brain even though they travel and work around the world.

The results gathered to date from the EIP project have been analysed and in the final year these findings will be used to grow a ley that performs the best in his farm’s conditions and farming system.

This article featured in the