Following an increase to their arable acreage, Yorkshire farmers John and David Thompson decided it was time to modernise their aged grain drying set-up. But they didn’t need a bigger dryer. Instead they freed up time by installing an electric-driven fully automatic 12t Magna grain dryer and a large holding bin into an existing shed. They can now dry 60t of grain each day and only have to load up twice.

At Green Farm near Pickering in north Yorkshire, cousins John and David Thompson farm in partnership with their fathers Les and Bill. They have 500 acres of arable land plus run sheep on 100 acres of grassland, and buy in beef stores to finish. John’s son Brad has left college and is now working full-time on the farm too.

“For about 10 years, we’d had an old 12t Pedrotti mobile batch dryer, bought second hand at a farm sale. It was PTO-driven which tied up a tractor. It was also manual and so a lot of time was spent loading and unloading it.

“The heat for the drying came direct from the flame, and there were a couple of instances where the grain caught fire – so we couldn’t ever leave it.

“As the dryer got older, it needed to be ‘finely tuned’ to work well, and I didn’t like anyone else to touch the controls!”

The tipping point for a new drying set up came when the Thompsons took on some more rented land and doubled the acreage of wheat that was grown.

In upgrading their system, they were determined to get one that would be a good investment for the future, one that was as modern as possible and fully automatic so that it was less labour intensive.

They looked at all the mobile recirculating batch driers on the market, and decided to go with an OPICO Magna diesel-fired dryer.  They liked the design feature in which the burner heats up bricks (Duax core heat system) and then it is the hot air, blown by a fan, which dries the grain. This safety feature also prevents unburnt fuel from getting into the grain.

“Good dealer back-up is also very important,” explains John Thompson. “We’d always had every confidence in our local dealer Wilfred Scruton Ltd for all our ‘back of the tractor’ requirements. So we asked them for a grain dryer quote.”

The Thompsons asked for prices for two Magna Automatics – one with a 12t holding capacity, and one with a 20t. The drying throughputs (the time taken to reduce moisture by 5%) were 6t/hr and 10t/hr respectively.

“We needed a dryer set up that could handle up to 800t of wheat grain coming in. So we were weighing up how long it would take to dry this.”

But they soon realised a faster throughput of grain was not the priority, but that having a dryer that was automated, was. “If drying gets behind then in this part of the country, there are usually wet days in the harvest season when we can catch up.

“We could dry up to 60t/day with the Pedrotti, but it was the manual operation that was the problem.”

So on considering the price difference between the different sizes – around £13,000 – the Thompsons decided on the 12t Magna, the same size as the old dryer.

The features of the Magna Automatic not only allow grain to be loaded and discharged automatically, but also include SMS text messaging. “If something goes wrong, the dryer shuts itself down and sends a text message to three phones – mine, Brad’s and David’s. So someone can go back to the yard to sort the issue,” says John Thompson.

“The dryer is programmed using a touchscreen which is easy to understand and use. It’s just like a big mobile phone!”

They also took the option of having a Sky-Vac dust-extraction system.

Instead of using tractor power, a new 100 Amp electricity generator was purchased from local firm Yorkshire Generators. “It was only a couple of thousand pounds more than a similar second hand one, and of course, came with a warranty.”

Each harvest-time, the old dryer and a 3t holding bin would be temporarily sited in front of a shed built for storing round straw bales.

But for the future, the Thompsons wanted the new dryer to be under cover so it could be used whatever the weather.  So the straw was moved out into a brand new shed to make way for the dryer set up.

However siting the dryer inside the shed posed some challenges, as although it had been built to a height of four up-ended round bales, it was a tight squeeze for the dryer.

Fortunately, the gradient of the yard was such that there was a 2ft difference in ground height from one side of the shed to the other. So the solution was to create a split level floor, and site the dryer in the lower area.

At the same time as concreting over the soil floor and raising it slightly to prevent water running in, concrete panels were installed along the walls, making the shed suitable for holding grain.

To be able to take full advantage of the automatic features of the dryer, a new 25t holding bin was purchased.

“With a 12t dryer and a 25t bin, then we go up at 7 o’clock in the morning, top up the diesel and then load enough grain for three loads to be dried. Then set it all off. The dryer heats and then cools the grain and an auger discharges it through to the next door shed. Then automatically the next 12t batch of grain is loaded. And so on.

“It depends how wet the grain is, but typically we expect a load to take 2 hours. So we can comfortably get 6 loads done, and only have to be back there once in the middle of the day to re-load the system.

“Having the dryer and bin on a lower level has been an accidental benefit: it gives the forklift driver a better view of how much grain is in the bin when he’s loading it.”

The new set up was ready for the 2015 drying season. The farm averaged wheat yields of 4t/acre with most grain coming off the combine at 18% moisture.

In all, the Magna clocked up 217 hours and dried 110 batches of cereals, beans and oilseed rape.

Not content with what is already a very tidy set-up, the Thompsons have plans for some further improvements.

For this 2016 season, they have bought a 2t bucket for the forklift which will halve the time it takes to load the grain.

“We also want to lay concrete in front of both the sheds, so that there’s less mud brought into them, and the forklift can travel between them on clean ground,” says John Thompson.

“The generator – which spent the winter tucked under the holding bin, needs its own housing so that it can be positioned permanently. Then we can run some electrics from it and put lights in the sheds and also shining onto the yard.”

“When we designed the pit for the dryer and the barriers around it, we left a doorway so it was easy for anyone to quickly access the dryer’s control panel from inside the shed. But last season grain would sometimes back up beyond this point. So we need to add a door and raise the height of the barriers to stop grain falling down into the pit.

“It’s surprising how much muck and dust comes off the grain. So to save having to keep emptying the Sky Vac bags, I’m also thinking of building a box to collect the dust which can sit on a trailer, and then this can be taken away and dumped every few days.

“Another small improvement is to add some sheeting to prevent rain blowing into the holding bin.”

The Thompsons are pleased with their decision to install the Magna with the 12t holding capacity. “The money we saved through not buying the larger one was enough to pay for everything else: the new holding bin, the concrete panels in the drying shed and the concreting of the soil floor.”

However they are also mindful of changes to crops and cropping areas in the future, which may force further upgrades to the drying system.

“I’m not sure how much longer we’ll be growing oilseed rape. It’s expensive to grow in the first place, and then there are the pigeons, slugs and cabbage stem butterfly to contend with.

“If more ground becomes available for rent locally, then we would like to increase our arable acreage. And with more grain that needs drying, we could simply sell the dryer and replace it with a 20t one. We wouldn’t need a bigger holding bin, and everything else is already there. ” 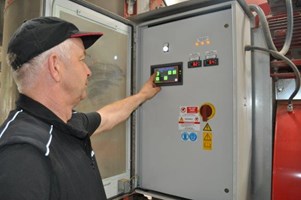 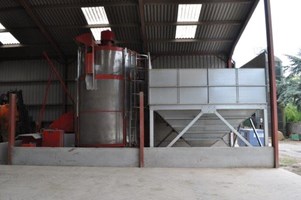 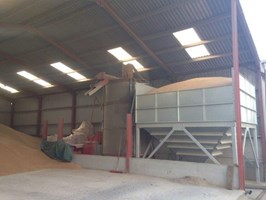 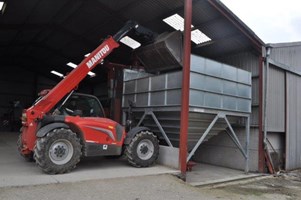 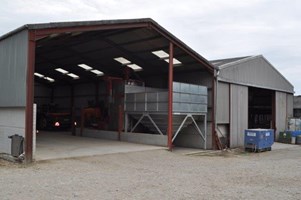 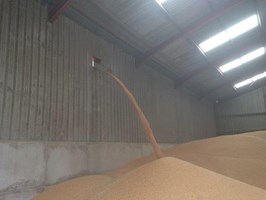 About the Magna 1200QF Automatic