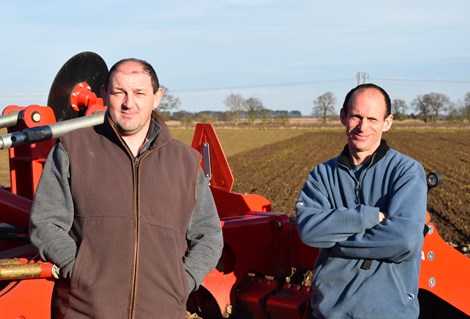 When it comes to choosing the right cultivation kit, flexibility is key for Lincolnshire growers Paul and David Metheringham.

With sugar beet as a cornerstone of the rotation and soils varying from light sands to silty loams, tillage tools are purchased based on their versatility and ability to handle a range of cultivations scenarios – ideally with one machine capable of a number of roles.

The farm is spread over three sites covering 465ha (1150acres) with a variety of soil types, the business runs a four year rotation including wheat, oil seed rape and sugar beet. The land is in both ELS and HLS environmental schemes, with a close eye kept on soil management.

“We can’t control the weather but with an extended drilling season post-beet harvest we need to be confident we can get crops in the ground, even in a wetter autumn and winter,” explains Paul Metheringham.

“This year we have been lucky again with dry, relatively easy conditions but when we are drilling wheat in January, wet, heavy cultivations can be a reality.”

The brothers have invested in minimum tillage cultivations kit on the majority of land, whilst retaining a plough in the armoury for back-up if conditions require the topsoil turning in a wet year.

In 2018, the farm had a newly purchased combination drill in the shed and it was agreed that a fresh cultivator was also needed for seedbed creation before and after the sugar beet crop.

With a one-pass cultivator in the fleet already, the mission was to find a machine that could sub-soil at a deeper level, whilst being able to create a surface tilth. It also needed to be lighter and easier to pull in difficult conditions. The farm runs a Fendt 724, a John Deere 6215R and a New Holland TS100, so with maximum pulling power of 240hp, a machine was required that could handle the lighter, wetter land instead of always needing to use the plough.

“Whilst our sugar beet contractor runs the harvester on low pressure tyres, these are still massive machines that can cause significant compaction,” says David.

“We grow 160 acres of beet to supply the local factory at Newark and needed a sub-soiler to loosen the ground but decided a multi-purpose machine would be more adaptable to also give us a one pass operation.” 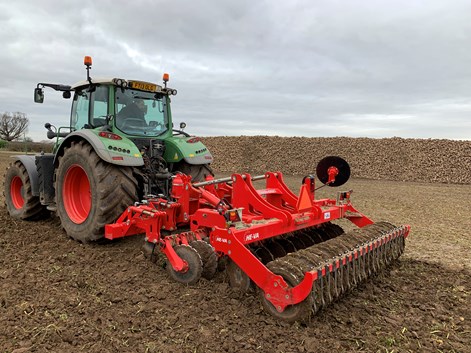 After various demonstrations, a 3m mounted HE-VA Combi-Disc was chosen as the best tool for the job, courtesy of dealer, Lincolnshire Motors. With five hydraulic auto-reset tines which subsoil to a 400mm depth and 510mm diameter scalloped Sabre discs to produce a tilth, the combination cultivator has a V-profile press roller to consolidate and leave a weatherproof finish, making it the ideal tool for the job.

“The Combi-Disc’s main role is seedbed creation before and after the beet crop and this is where it’s highly versatile and adaptable,” explains David.

“We can lift the legs out of work and just use the discs to move the soil lightly after a wheat crop, creating a seedbed for the beet which is not too fine to prevent soil blowing as we are quite exposed on some dryer, sandy land. This helps leave some of the straw on top whilst still creating a nice even finish. However, when we need to go in more aggressively after beet harvest we can use the discs to break a pan if the soil is dry or alternatively subsoil if there is deeper compaction.”

“The beauty of the machine is that it is all hydraulically adjustable from the cab so, with the flick of a switch, we can change the settings on the move to adapt to field conditions. This was a key factor in our purchasing decision, alongside the Combi-Disc’s auto-reset legs. At the time of buying, it was the best machine on the market.”

Bog-oaks are a regular problem on some of the land and it is not uncommon to hit obstacles, even during shallow cultivations.

“With previous cultivators we were frequently hitting roots and breaking shear-bolts,” explains David.

“That would then involve considerable wasted time fixing machines and getting back to work. With the Combi-Disc we can cover about 35acres a day with minimal interruptions thanks to the hydraulic auto-reset legs. They literally trip straight back into work after making contact with bog oaks, protecting the machine and allowing us to keep going.”

He keeps a regular eye on the pressure gauge and the hydraulics are tweaked depending on the land and conditions. If there’s a chance of obstacles it is set at a lower pressure but if it is dry and hard it can be increased to stop the machine bouncing and maintain a consistent working depth.

Likewise when pulling up headlands and tramline wheelings, Mr Metheringham can hydraulically alter the settings to keep the legs deeper. It might require a bit more pulling but it ensures the job is done effectively.

The only issue the brothers have found with the Combi-Disc is that the tines can block up if there is a lot of surface trash, as there are no discs on the front to break-down any tops. This could be overcome with a trailed machine, which can have leading discs in front of the subsoiling legs, but the manoeuvrability and overall flexibility of the mounted machine makes up for this and the farm has benefitted from having one machine which can be used as a straight sub-soiler or disc-harrow or any combination of the two.