Ag-tech from OPICO: Seeding and weeding FarmDroid in the field

The new FarmDroid concept which will be sold in the UK by OPICO, caught our attention recently and so we asked machinery journalist, Peter Hill, for an in-depth view of how this intriguing system will work.... 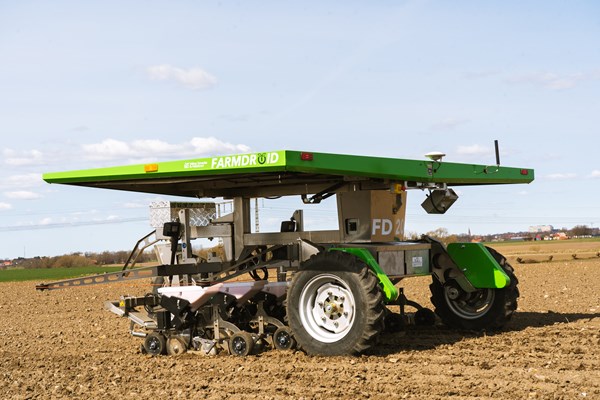 This £60,000 machine is dedicated to seeding and weeding crops without an operator and is taking to fields in the UK following an agreement between Danish manufacturer, FarmDroid and machinery firm, OPICO.

Powered by batteries charged by a large solar panel canopy, the FarmDroid FD20 will happily trundle across fields placing seed in a pre-programmed pattern without anyone being present.

A simple re-configure then enables it to gently keep weeds at bay to eliminate competition using hoeing elements working with millimetre precision between and within the rows.

“We’ve all seen the development of different autonomous machines for farmers and growers but this one appealed to us in particular because of its simplicity,” said James Woolway, OPICO's managing director.

“Instead of using cameras and complex vision recognition software to locate crop rows and weeds, the FarmDroid knows exactly where it has placed the seed and can hoe around the seedlings with remarkable precision.”

That approach does have the limitation that the machine can only weed crops it has sown – it cannot operate in transplanted seedlings, for example, or crops sown conventionally.

But with pretty much zero operating and labour costs, zero emissions and increased yield potential through maximum weed control and reduced soil compaction, especially on headlands, Mr Woolway is confident the FarmDroid has potential for conventional as well as organically-grown vegetables, salads, herbs and flowers, and even fodder and sugar beet, stubble turnips, kale and so on.

The FD20 is currently available in four, six and eight-row versions – the six-row covering 3m is the one priced at £59,500 – and with a sedate working speed of 450-950m per hour, its manufacturer recommends one machine for up to 20ha for seeding and a weekly weeding pass until the crop foliage meets in the row.

FarmDroid sales manager, Eddie Pedersen, told The Scottish Farmer: “Our system simplifies logistics because the idea is that the machine stays in the allocated area for the season; that’s one reason why it is constructed from stainless steel and has a solar canopy providing some weather protection.

“Since early 2020, we have sold 250 examples – including six in Britain so far – and users have told us they have seen up to 40% yield increases because of the lack of headland compaction and weed competition, which together with reduced labour costs – especially where they are mechanically weeding organic crops. This resulted in payback in less than a year.”

Autonomous seeding and weeding does require a change of mindset, accepting that fields will be sown over two or three days and nights, rather than in one quick hit using a tractor and precision drill.

But the ability to ‘blind weed’ before the crop has even emerged and to go in more frequently after it has, means weeds are tackled while they are still like wispy lengths of cotton rather than fully emerged and developed seedlings.

The FarmDroid process begins by recording the field or working area boundary then entering the row spacing and plant density required into the control system. Software then works out the in-row seed spacing and creates a map of locations (shown visually as dots) where each seed – or clusters in the case of salad onions, for example – will be placed.

Satellite guidance receivers front and back of the solar panel take ultra-high definition RTK correction signals from a £4200 base station to keep the machine running true by adjusting the speed of the electric motors on the two rear-mounted drive wheels, which are also steered conventionally for manoeuvring into position.

There are two sets of soil-engaging assemblies trailing from the front toolbar – the ‘active’ trailers are supplied with electrical power to operate the precision sowing and intra-row weeding mechanism, while the ‘passive’ trailers between them carry interchangeable weeding tools.

When in sowing mode, seed from a six-litre hopper is mechanically singulated in a bespoke cell disc – there is no need for air vacuum or pressure – then drops on to an electrically-operated ‘gate’ valve from which it is released once above the pre-mapped location.

“The slow forward speed and low release height means there is no possibility of seed bounce,” emphasised Mr Pedersen. “The seed drops to the precise position and stays there, which is why the machine can then hoe in the row with such accuracy and close tolerances.”

Like a conventional precision seeder, the sowing unit comprises a ‘clod plough’ and a leading depth control wheel up front, a twin disc opener and coulter to form a slot, then a seed press wheel, soil covering deflector blade and rear depth wheel.

For weeding, the mounting frame for the trailing assemblies is simply released and slid sideways along the toolbar – the ‘active’ trailers are then offset from the seed row so that an electrically-powered ‘flicking blade’ mechanism can tackle weeds within the row, while weeds between the rows are dealt with by the ‘passive’ trailers equipped with ‘wire’ or ‘A’ share tools.

Spacial settings and ‘flicker blade’ timings are adjustable to avoid disturbing seed or seedlings early on, especially in a cloddy seedbed, but allow closer tolerances of just 5mm between the rows and 20mm within for maximum weed control once seedlings are established and more firmly anchored.

Soil moisture parameters can be set to stop the machine working in conditions likely to be too wet or sticky. There is a mobile device app and on-board camera for remote monitoring and alerts, and all data held on the machine is also held on a FarmDroid server for machine monitoring, fault detection and correction, and as back-up.

In spring and summer, two fully-charged batteries, which are topped up via the solar panels as work progresses, have sufficient capacity to run the machine for 22-24 hours. If that level of longevity is required when daylight hours are much fewer, then a second pair can be added as a supplementary power pack.

James Woolway concluded: “We didn’t think we’d be getting into robotics so quickly, but with rising energy costs, labour issues and environmental considerations at the forefront of UK farmers’ minds, the timing couldn’t be better.”

This article was published in the