Future-proofing has been a key part of South Yorkshire farmer, Tom Morrell’s business. Over the past decade, Tom has been gradually expanding his acreage, whilst looking at how he can consolidate and keep costs down.

Tom both owns and rents his land, but a key part of the farm is now a venture farming partnership, Danum Farming Limited, with local farmer Richard Smith. The agreement, now 11 years old, has enabled both parties to expand their land area whilst working together to share machinery and labour.  Between Tom and Richard they now farm a considerable acreage and, as a result, have been looking at gradually increasing the size of their machinery.

Two years ago the partnership decided that a move from 24m tramlines to 30m was required as machinery was getting bigger and they needed to cover the ground more efficiently. 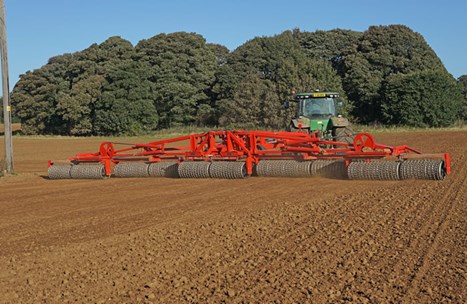 One immediate problem was their 12m set of rolls, which on 30m tramlines required having to take an extra pass. Within a year, advice was taken from another farm manager who was known to Richard and was running two sets of HE-VA King Rolls.

The decision was made to up-grade to a new 16.3m set of HE-VA King Rolls from a local dealer. Whilst not fitting perfectly into their current 30m tramline set-up, Tom and Richard wanted to buy a strong, well-built investment purchase and needed to allow for a possible future drill upgrade from 6m to 8m.

Over 1,500 acres were rolled last autumn and, so far, they have not regretted the decision. Tom commented, ‘We have a mixture of soils on the farm from heavy clay to a limestone loam on higher ground. Some land is very stony and this kit is heavy and solid and can roll the stone in really well. We have also built our own stone trays which u-bolt onto the outer rolls so that in bad patches of land we can keep stopping to hand pick-up larger stones. This gives us confidence when combining that we can get the header to the floor without risking damage.’

‘The rolls also cover the ground really quickly at about 10km/h maximum speed and handle well. At least 250hp is needed and we tend to use our John Deere 7280 to pull them, but switch to the higher horsepower John Deere 8345 on hillier land when more power is needed.’

‘From a standing start it does feel like you may never move as it takes some horsepower to get started but once you are moving you don’t know the rolls are there.’

The King Roller's hydraulic folding system is linked to two accumulators and a hydraulic pressure gauge. The pressure gauge allows the operator to set the amount of weight transfer to ensure even consolidation across the full width. The accumulators act as an oil buffer when the rolls are travelling over uneven ground and the hydraulic rams need to extend or shorten to allow the rolls to follow the contours.

‘The weight transfer is fantastic and rolls the full width of the machine, without any bridging’, explains Tom. ‘All the roll sections are on pivots in the middle and allow each section to move and contour the ground – which is important on our gently undulating land giving us good coverage.’ 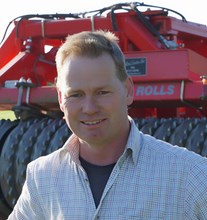 The rolls also have a hydraulic folding system which means they can be completely folded and secured without the driver leaving the cab.

‘It seems slow to unfold and fold the rolls but this may be because I am just sitting in the cab watching and my previous rolls I had to get out and physically strap them up. It probably takes a similar amount of time overall and it is very easy.’

‘Our land is pretty much ring-fenced although local roads are very busy. However, despite their size the rolls are easy to transport, as long as front weights are used to balance the tractor and maintain good road handling.’

Concluding, Tom commented, ‘It is early days but the rolls are good so far and they will be a great investment for the future of the business.