Planning ahead with a new automated grain drying set-up 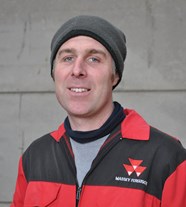 Planning ahead and being prepared for the next 10 years was the goal for farmer Stuart Whitehouse last year when he extended his grain stores and installed a 20t Magna automatic batch dryer – its larger size and automatic loading and unloading would save the need to employ extra labour, and ensure drying kept pace with harvesting.

At Gayhill Farm on the southern outskirts of Birmingham, Stuart farms in partnership with his parents. They grow 650 acres of combinable crops – feed wheat, feed barley, plus beans and milling oats for the food industry. However, last year, with no blackgrass-clean ground, oilseed rape was grown instead of the oats.

Other enterprises include hay and haylage, a small Texel flock and a suckler herd for which 70 calves are bought in each year, multi-suckled and then finished.

Although close to Birmingham the farm is on high ground – mostly 700ft above sea level. Stuart explains: “This means we are late to start harvesting. So it’s not unusual to finish the second week of September. Last year though, it was 7 October before we had finished!

“My father drives the combine, and we have a part-time man for grain carting, but I’m doing everything else, including looking after the cattle! Six years ago we were growing 350 acres of arable crops but now we are up to 650 acres, my parents are heading towards retirement, and so we needed more of an automated grain drying system that could keep up with the harvest and not need so much of my time.” 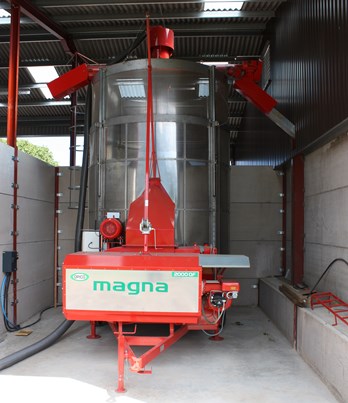 In 2011, a 12t gas-fired GT Dryer had been purchased, and was powered from the PTO of an old International tractor. Stuart explains: “The GT dryer was bulletproof, nothing ever went wrong with it. I think we had one bearing go in 7 years. It took 3-3.5 hours to dry each load, and I used to fill it from one grain trailer and then download it into another one. So, it could dry 60t/day but only if I was up early and finished late.”

Last year, recognising the need to automate the process, Stuart obtained quotes from several grain dryer suppliers. In the end he opted for a diesel-fired 20t Magna automatic batch dryer, through JJ Farm Services in Cheltenham.

As from 2017, the dryers in OPICO’s Magna range are now galvanised or fitted with stainless steel components in corrosion-susceptible areas. The whole upper bin and plenum are made of stainless steel or galvanised steel. The bottom well, loading hopper and intake auger tube have also been completely galvanised.

Stuart adds: “We’ve always had good service from JJs. Their quote was £2,000 dearer but it’s not all about the price. The Magna is faster filling and faster emptying, and there was a 0% finance deal as well.

“And we got a good trade-in price for the GT Dryer as well – after seven years of use, it had only depreciated by £7,500!”

The method by which grain was loaded into the dryer also needed a re-think.

Stuart chose not to install a grain bin, he explains: “We got some quotes and it was going to cost around £5K for the size of bin we would need – one which would take two 20t loads. We would of course also need a spare telehandler and an operator to load it. And it would take up space that could only ever double up as a fertiliser store. Then there was the height of the bin to consider, and thus the height of the building.”

So instead, the existing grain shed was extended with two more bays, of which the inner one was divided with a wall across the middle. On the far side of the wall, the ground was dug out to create a floor 1 metre lower, onto which the Magna was sited. Dried grain can then be discharged either into the new end bay or into the old bay. On the yard-side of the wall, Stuart made a large grill to fit into a hole in the floor over the dryer’s intake tray. This allows wet grain to simply be dumped straight from the trailer onto the floor, and it then falls down through the grill.

Stuart adds: “I fabricated some deflectors under the grill to funnel the grain into the intake tray. Now all I have to do is just keep tipping and pushing the grain over the grill.

“The Magna loads and unloads automatically. It has a text messaging system which tells me when the drying cycle is finished or if it’s run out of grain to load, or if there’s a problem, say, if filling is taking more than 45 minutes.

“So the set-up worked well with up to 20% moisture in the grains. But towards the end of the harvest, moisture levels reached 25% and I did have some problems as the dryer was trying to fill quicker than it could dry. The RCD kept tripping the central auger. So with advice from JJ Services, I now overcome this by restricting the intake when the grains are really wet.”

Drying grain through a batch dryer can increase bushel weights: chaff, weed seeds and broken grains are removed in the process and the drying action also cleans and polishes the grains.

Stuart adds: “2012 was a bad year for bushel weights but I made an extra £14/t for the grain just by putting it back through the GT dryer again and getting an extra 2-3 kg/hl.”

In the new set-up, Stuart has added a Sky Vac cleaner for the first time to extract dust and chaff and further clean grain samples for better bushel weights: “Over the season I reckon we carted away two and half loads of chaff in our 6 tonne trailer!

“I wanted a system that would be good for at least the next ten years – a bigger dryer to cope with perhaps larger acreages, and automation to save on labour. It’s working well. I can dry 100t of grain comfortably in one day, and there is scope to dry up to 160t on a longer day,” explains Stuart.

“It took the dryer 200 hours to dry 1,000t, and with the automation, I won’t be needing to employ extra labour to man the dryer once I take over the combining.”