Moving to a new farm threw up several challenges for farming couple Paul and Madeline Crawley, not least the farms' soils which needed urgent attention and a drilling strategy to suit. 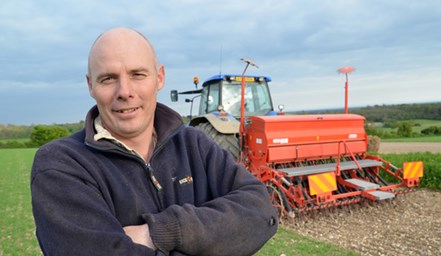 Having spent over a decade managing a large organic dairy herd in Sussex, the couple secured a 267ha (660acre) tenancy on the National Trust's Slindon Estate in the South Downs in 2013.

The tenancy was secured on that basis that the land would be farmed to the highest environmental standards but the hungry chalk down land was going to require some serious action to regenerate its fertility after years of intensive arable production.

After much consideration they decided organic conversion was the best, most sustainable way of doing that and maintaining a healthy cash flow for the early days.

Livestock were always going to form the mainstay of the business but keeping a varied, sustainable rotation was also a key part of the strategy in getting the land back into good heart.

For their efforts the couple won silver in last year's British Farming Awards' New Entrant: Against the Odds category.

A key part of this was their commitment to having a sustainable rotation which benefited the soil, the environment and their cropping.  Being able to do their own drilling in a timely fashion is critical to this, says Mr Crawley.

At the time they already owned a lot of the kit needed to run the new enterprise, having operated under a contract farming agreement at the previous farm.

It was a convenient coincidence that the couple had invested in a new Maschio Dama box-drill in 2012 that was more than capable of handling all the new farm’s cereal drilling as well as a good chunk of the establishment of the fertility-building crops.

While they had owned a 3m Maschio power-harrow for three years previously, using it to prepare seedbeds for whole crop triticale and new leys at the dairy farm, they didn't have a cereal drill and instead used contractors to get the crops in the ground. But with the bills for the service starting to mount while margins were increasingly squeezed, the Crawleys did their figures and decided it made sense to do their own drilling as they already had the required horsepower.

"This made sense for us with the move to the new farm releasing more time as we no longer had to milk cows morning and night."

Paul was keen on the simplicity of a box-drill and looked at various different options including second-hand units that could be piggy-back mounted on the power-harrow.

"When we came to price up a new Maschio drill, it made more sense to design it for the harrow than trying to modify something to fit.

Over the last five years the Dama drill has been used to sow over 100ha (250acres) of barley every spring plus a further 28ha (70acres) of oat and pea mix. In addition it is used to establish wild bird seed mixes and some other HLS options where particular crops have to be drilled. 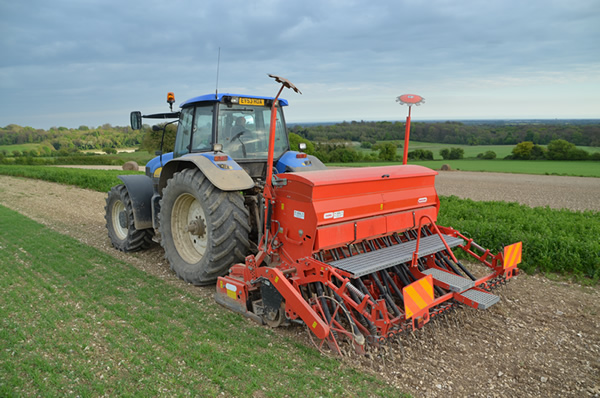 Paul Crawley says "The combination’s ability to get the job done in one pass makes it a very straightforward operation.

Likewise, calibration is simple - just flip down the trays and wind the handle a set number of turns.  It also handles a wide range of different seed sizes well, with a lever used to easily alter the hopper's outlet aperture." 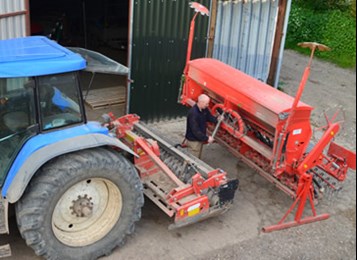 Paul also praises the drill's flexibility "The drill's mounting to the power harrow allows it to be dropped off and the power harrow to be used on its own all in under than two minutes – two legs are fitted, two pins and a top-link removed and then just drive out."

"So far, the drill has not had a single fault to date.  The only spare parts required have been a new set of power harrow tines each year."

Every decision is carefully costed at Courthill Farm "it has to be," says Paul "The outlay and running costs of the drill are justified by the offset contractor charges."

Cheap horsepower is one key area – a 175hp New Holland TM 175 was bought three years ago.

"At £18,000 it offered good value for its size and is more than capable of comfortably running the drill at 12-15kph. If things get catchy it’s got plenty of spare capacity to push on to get the job done in good time."

"The drill has proved itself in a variety of conditions and has certainly helped us towards our organic goal."

The Crawleys are focused on annual running costs, including depreciation, and the Maschio Dama Drill fit the bill perfectly.